To keep its finances in sync with its aircraft and engine leasing partners, the Lufthansa Group needs to manage and monitor complex leases and contracts throughout their entire multi-year lifecycle. SWISS, a member of the Lufthansa Group, has harnessed the AMT-SYBEX Leasepoint platform to build a sophisticated lease management solution, which has now been adopted group-wide. By replacing spreadsheets and manual processes, the solution automates lease reporting, minimises the risk of errors, and helps to ensure that maintenance reserve claims are always timely and accurate. The application also provides audit trails and the data-input is validated through a 4-eyes principle, ensuring the correctness and quality of the data.

Like most airlines, SWISS and its sister-companies within the Lufthansa Group relied on a combination of spreadsheets and calendar reminders to manage the contracts for the leased aircraft and spare engines that make up 20 percent of their fleet. With the whole airline industry facing challenging economic conditions, SWISS wanted more control and visibility of lease conditions and lessor contribution claims’ status.

Working with AMT-SYBEX, SWISS replaced its manual, spreadsheet-based processes with a comprehensive lease management platform that provides a single source of truth for contracts and relevant financial and engineering data. All Lufthansa Group airlines as well as relevant central functions are now using the new system, which provides a 360-degree view of aircraft and engine leases across the group.

Lufthansa Group is the largest airline in Europe and the founding-member of the Star Alliance, the world’s largest airline alliance. With subsidiaries including SWISS, Austrian Airlines, Brussels Airlines and Eurowings, the company operates one of the largest fleets in the world, with over 700 aircraft, of which around 20 percent are leased from third-party lessors. Fabiola Jaymond, Senior Manager Aircraft Asset Management at Lufthansa, comments: “Leasing is a complex business, and the ramifications are often misunderstood even within airlines themselves. It’s vital for asset management teams to provide accurate, timely information to help all kinds of stakeholders—from engineering to finance—make the right decisions about leased aircraft.”

Going beyond the industry average

Even though aircraft leases typically involve multi-year, multi-million-dollar contracts between lessors and airlines, the current best practice for lease management in most airlines still depends on manual processes and basic office tools, such as spreadsheets and calendar reminders. The lease agreements themselves are huge, complex documents, typically stored in PDF format—and determining the current status of a given lease often involves reviewing hundreds of pages of text, including both the original contract and any amendments or extensions that have been added over the years. “Answering even a simple question can be very time-consuming, because each lease is in a different format and it’s not obvious where to find the relevant information,” says Jaymond. “Moreover, since the lease may run for many years, it’s difficult for a team to preserve its knowledge of all the ins and outs of every contract—especially if key employees retire or leave the team. Spreadsheets are the default way of managing this data, but keeping everything consistent across multiple large worksheets is not easy, and errors become inevitable.” As the airline industry becomes more and more competitive, it is of even greater importance that airlines have an easy and transparent access to contractual conditions. For example, if an airline pays for maintenance on a leased aircraft, but fails to claim an appropriate amount of maintenance reserve from its lessor, the shortfall can wipe several hundred thousand dollars from the company’s bottom line. Within the Lufthansa Group, SWISS was the first to see the value in tightening up its lease management processes and decided to take the lead in finding a better solution. “We wanted greater visibility and control,” says Jaymond. “The question was how to achieve those goals. With most of the industry still using spreadsheets, we needed to be pioneers in finding a new approach.”

SWISS considered various options, such as adapting an existing system used by other departments in the Lufthansa Group, or developing a new platform themselves. However, Jaymond explains: “Most of the systems we found within the group were designed for purchasing, not leasing, especially not aircraft leasing and we needed a system that would support a wide range of stakeholders and use-cases, so it would have been a big project to build something from scratch.” Instead, SWISS went to market and issued a RFP to the major vendors in the lease management space. “After a detailed evaluation we chose AMT-SYBEX,” comments Jaymond. “We appreciated that their Leasepoint software seemed more flexible in terms of configuration, and they also had good support for on-premises deployment, which was an important factor for the Lufthansa Group IT team at that time.” SWISS knew that it would be the first airline to adopt Leasepoint as an inbound lease management solution: at that time, the majority of Leasepoint users were aircraft lessors, rather than airlines. As a result, the team was prepared to work with AMT-SYBEX to make some significant customisations. “One big thing was the integration with our AMOS maintenance system, so that we could get monthly utilisation data for each aircraft without having to type it in manually,” says Jaymond. “Lessors don’t use AMOS, so we needed to add that capability to the product—and it now works very well. Where possible, we want to use the high-quality data we already have in our other systems and create corresponding interfaces, instead of creating and maintaining yet another data silo.” Once SWISS got the solution up and running, it was decided to deploy this solution to the other airlines and central functions of the Lufthansa Group. Today, the platform is being used by Austrian Airlines, Brussels Airlines, Edelweiss, Eurowings and Lufthansa, but also by some of the group’s central functions such as the Financing and Fleet Procurement department. “What’s great is that we can have a single instance of the application for the whole group,” says Jaymond. “We’ve even been able to institute a four-eyes policy for all leases within the group—so if one party updates some information about a lease, that data gets checked and is then immediately available for the others.” As a next step, the team is planning to add new types of data to the system, such as technical specifications, which will be useful for remarketing aircraft. Longer term, they would also like to take advantage of Leasepoint’s forecasting capabilities, which would enable detailed simulations and what-if analyses. We already have significant amount of data from our aircraft available in our other systems. With Leasepoint we can now better integrate it with to build a bridge to our contractual commitments. This would enable us to easily run scenarios and evaluate risks and opportunities for our leased fleet.

The sky’s the limit

Today, Leasepoint gives the Lufthansa Group a single source of truth for all lease-related information. Instead of unwieldy spreadsheets and 150-page PDFs, the key information about each lease is stored in a structured, consistent format in a central database. As a result, when the asset management teams get a question from the finance team, they can find the answer in an instant, without having to trawl through pages of documentation, and with no risk of overlooking an important amendment or extension. For more complex inquiries involving multiple leases, they can also use the grid view within Leasepoint to break down the contracts in different ways, such as by aircraft type, owner or lessee. Since the information is stored in a structured way, it’s also easy to generate reports. For example, SWISS now sends out a monthly report on asset status to all stakeholders within the group, notifying them about new, updated or expired leases. Equally, when the Fleet Procurement Team of the Lufthansa Group is preparing to negotiate with a lessor, the team can quickly generate lease summaries to ensure that they have all the important information at their fingertips—instead of spending several hours writing reports manually. As another example, if a contract specifies that the lease rate for an aircraft will change over time, Leasepoint can take this information into account and automatically adjust the monthly payment that is reported to the treasury department. Previously, the team relied on calendar notes to remind them to make these adjustments manually, which was always a potential source of error. Finally, Leasepoint allows the Lufthansa Group to increase the level of detail in lease monitoring significantly. Previously, maintenance reserve balances were only captured for the whole aircraft; now, the system provides separate balances for the different components of the aircraft, so it’s easy to see the maintenance costs and claims for the engines, landing gear, and other components. This makes it much easier to ensure that maintenance reserve claims are accurate, and to avoid disputes with lessors over maintenance obligations. Jaymond concludes: “With AMT-SYBEX Leasepoint as a single source of truth for lease information, we can provide timely, accurate information to our stakeholders, faster than ever before. As a result, the whole Lufthansa Group can make better financial and maintenance decisions about more than 100 leased assets in our fleet.”
Case Study – Lufthansa 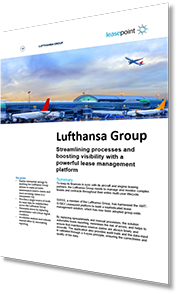